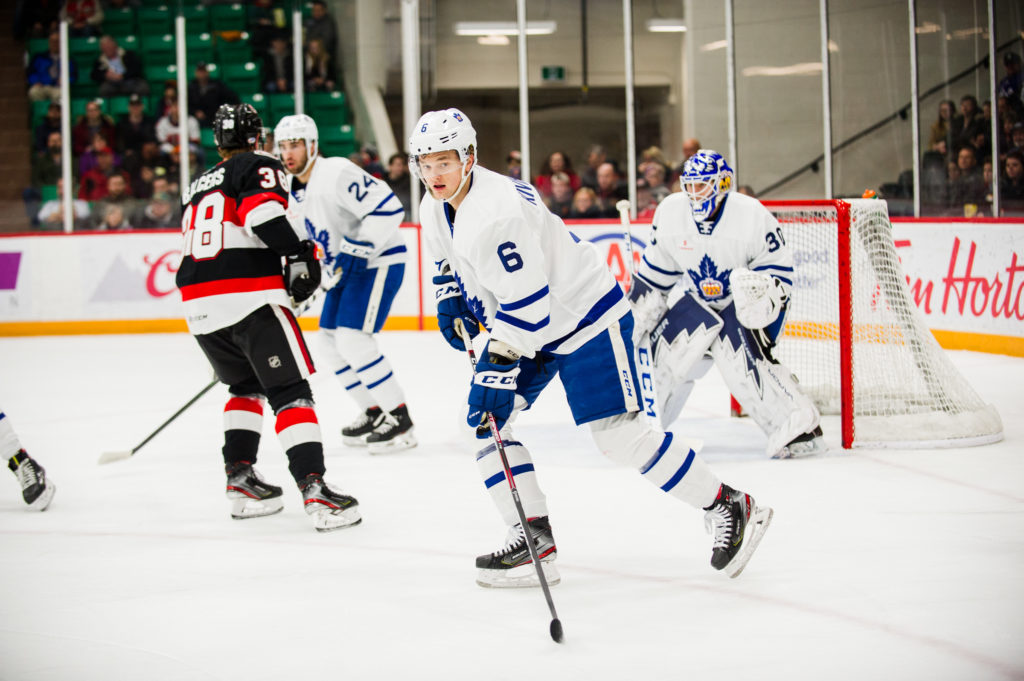 The Marlies suffered a tough loss Friday night, dropping a 7-4 decision to the Belleville Senators.

Pontus Aberg opened the scoring at 4:30 of the first period, giving the Marlies an early edge. Tanner MacMaster and Kristians Rubins assisted on Aberg’s 15th of the season. At 13:24, Belleville’s Jordan Szwarz capitalized on a man-advantage to even the score 1-1.

The Marlies would head to the power play 22 seconds into the second period as Rudolfs Balcers was called for interference. 41 seconds into the man-advantage, Nic Petan found Mason Marchment in front of the Belleville goal and he buried his sixth of the season to restore the Marlies’ lead. Joseph Duszak picked up the secondary assist on the goal. Petan and Marchment connected again minutes later as Petan set Marchment up for a one-timer and he made no mistake to put Toronto ahead by two. At 15:59, Michael Carcone brought Belleville back within one. At 17:56, Belleville’s Alex Formenton would sit for two for roughing, giving the Marlies another opportunity on the power play. Marchment, Petan and Duszak converted yet again on the ensuing man-advantage to give the Marlies a two-goal cushion. That lead was short lived as Josh Norris narrowed the gap with three seconds remaining in the second period. The Marlies were ahead by one heading into the final frame.

The Senators added four unanswered goals, including a shorthanded marker as well as an empty netter, stunning the Marlies in a 7-4 final.

Toronto will now head home for a pair of divisional games to close out the weekend.

On solid individual efforts despite loss:
I’d say today’s the most frustrating loss we’ve had, not that they’re not all frustrating but I mean Agostino, Petan, Marchment, from power play to 5-on-5, those guys gained a lot of momentum for themselves and for the team, they had a huge impact on this game. I thought Duszak came in and had a really good game for us. Hollowell, Kivihalme – there were some good efforts today, some guys stepped up for the team. There were again moments of the game we controlled. At this point, it’s really frustrating, it’s difficult. We need to start seeing results.

On quality chances increasing for Toronto as the game developed:
They did for us today. First period was a little slow. It was an even score after one. I knew we had better as a team and they came out and responded in the second period. I thought we out chanced them to 2-to-1 in that period and carried into the third then things just started to fall apart for us. There’s no excuses, we’ve got to start finding a way to get wins.

On whether this game is a learning experience or should be thrown away ahead of tomorrow’s game:
Every game’s a learning experience. Every game at some point we have to put behind us. We’ve got to chisel away at getting better. I do think if we look at our segment of games, last six, seven games, there has been better hockey played. We’ll continue to trend, we’ll continue to get better and we’ve got to find a way to go on a run.

The Toronto Marlies are kicking off the weekend on the road tonight as the Battle of Ontario returns to Belleville.

The Battle is heating up as tonight’s game marks the second meeting between these division rivals this week, and second of four meetings this month. The 12-game regular season series is now even 3-3 after Belleville picked up a 3-1 win over the Marlies on Tuesday. The Senators continue to be hot and are coming into tonight’s game riding a five-game win streak. Following Tuesday’s win, the Senators became the second team in the league to reach the 30 win mark. They remain in first place in the North Division and second in the league with 64 points.

The Marlies continue to struggle to find consistency and currently sit three points shy of a playoff spot. When asked about the Marlies placement in the overall standings following Tuesday’s game, head coach Greg Moore commented “if we’re still looking back at the last four games before tonight, like I had mentioned in previous interviews, we’re starting to build a lot more consistency in our 5-on-5 play. I had mentioned prior as well that special teams had plagued us a little bit, tonight was a part of that again. There’s still positives to build on. It doesn’t happen overnight, we’re going to keep going.”

With important points on the line this weekend, the Marlies will be looking to build on those positives as they get set for a trio of divisional games. Following tonight’s game, they’ll face Rochester and Laval, two teams they’re chasing in the North Division standings.

Puck drops at 7:00 PM tonight on AHLTV. Fans can also follow along on Twitter (@TorontoMarlies) for live updates.