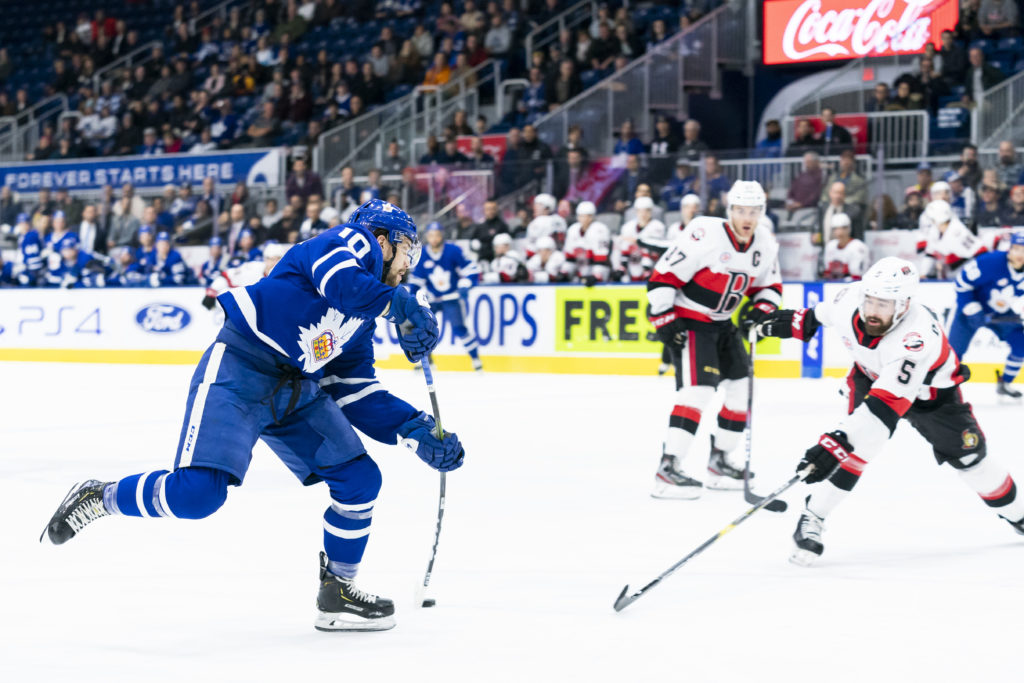 The Belleville Senators evened up the regular season series tonight, edging the Marlies 3-1. Egor Korshkov opened the scoring at 5:28 with a highlight-reel goal, waiting out and stepping around Senators’ goaltender Joey Daccord for his 11th of the season. Jordan Schmaltz and Tyler Gaudet assisted on the opening goal. Two minutes later, the Senators responded to even the score 1-1. The Marlies outshot the Senators 10-8 in the opening 20 minutes and the score remained knotted 1-1.

The Senators took the lead with a shorthanded goal at 9:25 of the second period, and extended their lead to 3-1 with a power play goal late in the frame. The Marlies battled to get back in it in the third period, but couldn’t find a way to cut the deficit as Daccord turned away all eight shots he faced to preserve Belleville’s 3-1 lead.

The Marlies will head to Belleville on Friday for a rematch before heading home for a pair of divisional games this weekend.

On tonight’s game:
Five-on-five, I was really happy with how we played against one of the top teams in the League, which I think we are as well. We went toe-to-toe with them. Special teams let us down tonight.

On the team’s placement in the overall standings:
That’s focusing on results, which are important. If we’re still looking back at the last four games before tonight, like I had mentioned in previous interviews, we’re starting to build a lot more consistency in our 5-on-5 play. I had mentioned prior as well that special teams had plagued us a little bit, tonight was a part of that again. There’s still positives to build on. It doesn’t happen overnight, we’re going to keep going.

On why Jeremy Bracco did not play tonight:
Away for personal reasons.

On tonight’s game:
I thought 5-on-5 we were generating a lot of chances, a lot of looks. We didn’t capitalize on enough of them. Special teams, we’ve got to be better. It’s losing us hockey games not capitalizing on the power play, not shutting down the PK and we’ve got to find a way to get that going so we can start climbing the standings.

On not capitalizing on two consecutive power plays in the second period:
It’s huge. It’s a turning point. We had a five minute power play there and then a four right after. We just weren’t executing and we had a couple different looks there on the unit so we’ve just got to get back to the drawing board here. We know we’ve still got a good opportunity here this month so we’ve got to start winning some hockey games and doing our job and hopefully climb the standings as fast as we can.

On the message to the team as a leader in the room:
You’ve got to forget about this one. It’s behind us now, and just look for the next game. We know it’s not going to be easy. Teams come in and they’re ready to play us. Toronto’s been known to be a good team for the last five, ten years and teams get up for those games so we’ve got to find a way to bring our A-game and start winning some hockey games.

The Battle of Ontario returns to Coca-Cola Coliseum tonight as the Marlies and Senators get set to square off for the sixth time this season.

This marks the halfway point of the 12-game regular season series between these North Division rivals, and the Marlies hold a slight edge having won three of the previous five meetings against Belleville. The Marlies will have a tough road ahead as they battle the division-leading Senators four times this month. The Senators have really picked up steam and continue to be one of the top teams in the league, sitting in second place with 62-points. They’ve won eight of their previous 10 contests, and come into tonight’s game riding a four-game winning streak.

Consistency has been the biggest concern for the Marlies, who will be looking to string together some points down this stretch of must-win games. The Marlies currently find themselves out of playoff contention, sitting one point behind the fourth place Laval Rocket. “We know it’s going to be a test, it’s going to be a battle for the rest of the year,” said Marlies forward Adam Brooks following today’s morning skate. “We have a really tough division this year and this is one of the teams we’re currently chasing, so the things that they’ve been able to do in putting together wins and stringing together a lot of victories is something we’re trying to do here right now,” added Brooks. “Obviously it starts tonight and playing these guys a lot coming up here, these are big games.”

Puck drops at 7:00 PM tonight on Leafs Nation Network and in the Maple Leafs App.