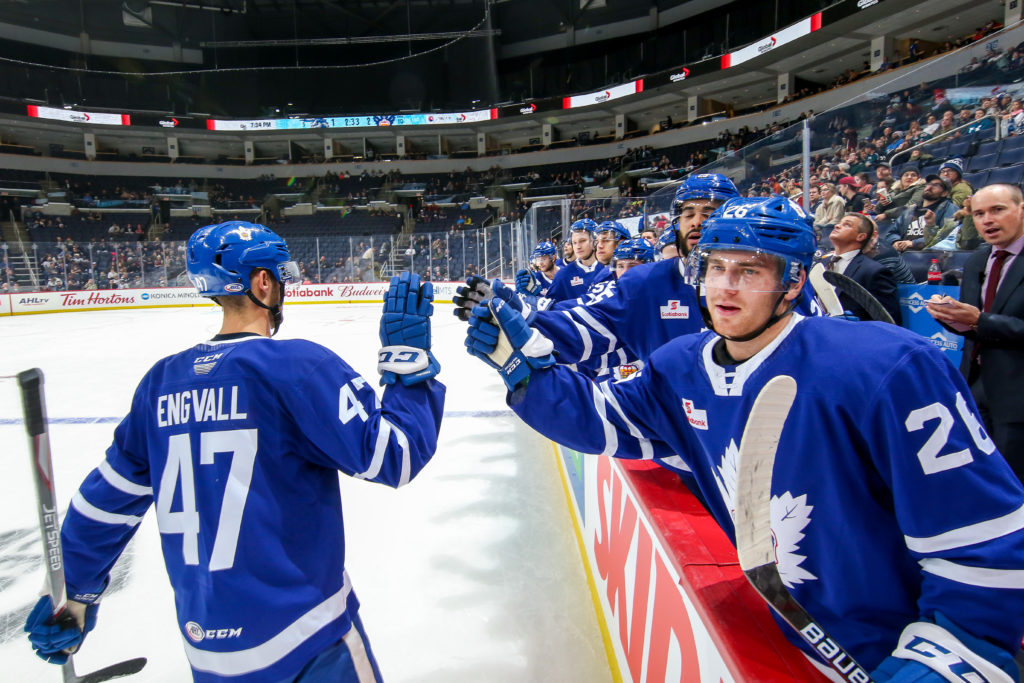 The Marlies picked up their second straight win on Friday, outlasting the Manitoba Moose in a 3-2 final.

Egor Korshkov opened the scoring for the second game in a row to give the Marlies an early lead. Tyler Gaudet drove the net and Korshkov was right there on the doorstep to cash in the loose change at 8:41 of the opening frame. Matt Read picked up the extra assist on the opening goal. The Moose answered back and evened things up at 14:10 with a goal from Andrei Chibisov. Late in the frame, Pierre Engvall restored the Marlies’ one-goal lead, wiring home a shot from the hash marks. Pontus Aberg found Engvall all alone on the far side and he made no mistake beating Mikhail Berdin to give the Marlies a 2-1 lead heading into the first intermission.

The second period saw both teams exchange a number of penalties, but it was quiet on the scoring front. Logan Shaw potted the lone goal of the frame, a shorthanded marker, to even the score 2-2 heading into the third.

Early in the third period, the Marlies had an opportunity on a delayed penalty and were able to convert with an extra attacker to restore their lead. Jeremy Bracco sent a pass back to Jordan Schmaltz at the point, who fired a shot at the net that was redirected by Gaudet. The Marlies held their lead for the remainder of the period, and with time winding down and the Moose looking to force extra time, Berdin skated to the bench to make way for an extra attacker. The Marlies stood strong to preserve their one-goal lead until the final buzzer sounded. Kasimir Kaskisuo made 20 saves, earning his second straight win of the season.

The Marlies and Moose will square off again tomorrow afternoon for a 3PM ET puck drop at Bell MTS Place.

On what he learned about the team from tonight’s win against Manitoba:
A number of things. You’re still getting to know every player individually. You get Garrett Wilson in the lineup here today, it’s our first real chance to see him. Obviously, he missed all of training camp with both us and the Leafs so we’re getting him up and running so that was a really good thing. Jesper Lindgren’s first game here so we’re getting a feel for how we look with three righty, leftie d-pairs but also just in really learning what we want to do as a team and the type of team we’re going to be, that’s kind of manifesting itself period-by-period. But I also just like that we find ways to win. It’s the second goal we’ve scored on a delayed penalty here in the two games and that’s a really nice thing. It’s an area we’d like to get better at as team, we talked about that this week, so it paid off again for us here today. We’re just continuing to learn. It certainly was not a complete game by any means by us. But we found a way to win again, there were a lot of good things in the third period that we’re going to have to build on for tomorrow.

On the different line combinations used in tonight’s game:
I liked that line with Gaudet (with Korshkov and Read), that was a good line for us today. I do like our lines and our balance. It’s going to take us time to figure out who’s the right people to play with each other. But we like what we see so far, we’re probably going to experiment as we get moving along. We’ve got some guys in Kossila and Agostino that didn’t play today that we think are going to be really good and important players for us. Once we get them healthy, that’s going to change our look. It’s early, it’s early going here. It seems like we’ve been together a good while now, a lot of practice time but it’s only the second game and even though it’s a quick turnaround, we’re happy we get to play another game and just keep going here.

After almost a week off, the Marlies return to action tonight for their first of back-to-back games against the Manitoba Moose.

Toronto had a strong start to the 2019-20 season, topping the Belleville Senators 4-1 in their season opener last Saturday. Egor Korshkov notched the opening goal for the Marlies, while Jeremy Bracco had three helpers in the game which earned him first star honours. Kasimir Kaskisuo made 31 saves in his season debut, including a saved penalty shot. The Marlies were 2-for-5 on the power play and 4-for-4 on the penalty kill.

The Moose dropped their season opener last week, falling 2-1 to the San Antonio Rampage. They followed that up with a 5-3 win over the Texas Stars the next day to bring their record to 1-1 heading into tonight’s home opener.

The Marlies beat the Moose in three of their four meetings last season and have a 19-4-1-0 record against the Moose over the past five seasons.

Puck drops at 8:00 PM ET on AHLTV. Fans can also follow along on Twitter for live game updates.