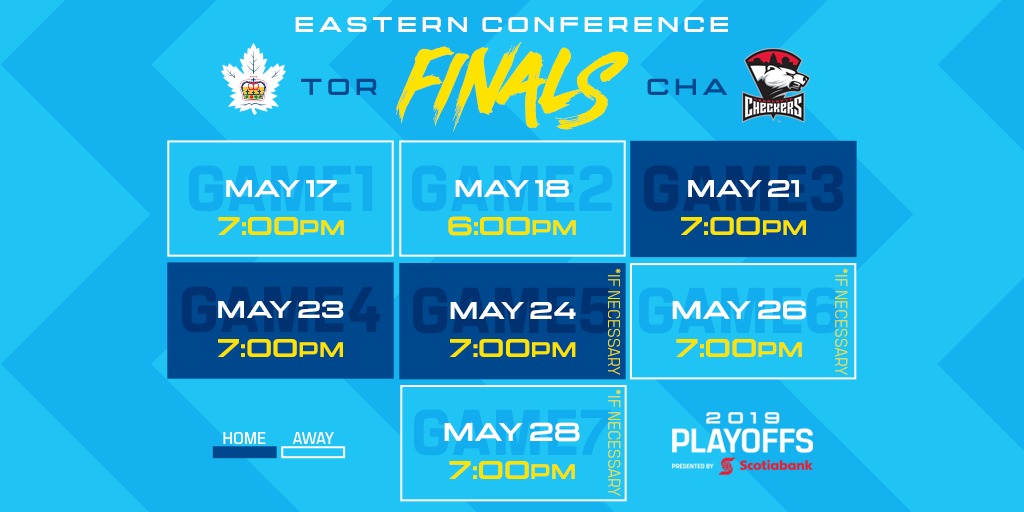 The Toronto Marlies are set to face the Charlotte Checkers in the Eastern Conference Finals of the 2019 Calder Cup Playoffs. Toronto will start the seven game series on the road, returning home for Games 3, 4 and 5. The full series breakdown can be found below.

Following their 6-2 win over the Cleveland Monsters Tuesday night, the Marlies have won seven straight playoff games, sweeping both the North Division Semifinals and Finals. This is the sixth time Toronto has advanced to the Eastern Conference Finals in franchise history and the third time in four years.

All Toronto Marlies playoff games will be broadcast on Leafs Nation Network and AHL TV. Canadian residents can also stream games through the Toronto Maple Leafs app. Visit Marlies.ca to purchase a 2019-20 Marlies Membership to secure complimentary tickets to all home games in Round 3 of the Calder Cup Playoffs. Single game tickets will be available for sale Thursday, May 9th at 10:00 a.m. ET at Ticketmaster.ca. For more information on the Toronto Marlies 2019 Playoffs Presented by Scotiabank, visit Marlies.ca/playoffs2019.